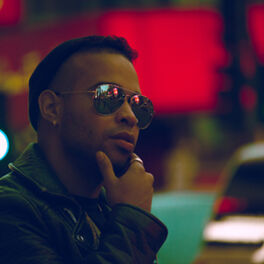 Blame It on Me

Making experimental, 80’s nostalgic and urban pop music. Eliexis Fabian Rodriguez known by his stage name Eli X incorporates genres like Trap, Rock, Funk, and Latin. He was born in Providence, Rhode Island and proudly represents his roots from Puerto Rico and Dominican Republic. At a young age he was involved in his church choir and learned to play the piano by watching his family play the instruments on Sundays. By the age of twelve, he began writing poetry, which turned into songwriting and song recordings. Growing up in the streets of Providence there was so much diversity he absorbed the Latin music and was inspired by Tupac. He loved the music and fashion of the 80s and his collection included Michael Jackson and Prince. He moved to Florida and attended Full Sail University and worked shifts at a fast food chain. He wanted to live his rock star dreams so he dropped out and established his own record label “No Digas Mas”. He turned his living room into a studio while working on writing songs in both English and Spanish. Eli X was also developing his engineering, rap skills, producing his own beats and directing his videos. He released his successful single, “Dime” featuring Omega El Fuerte and reached Top 10 in the Latin Billboards.