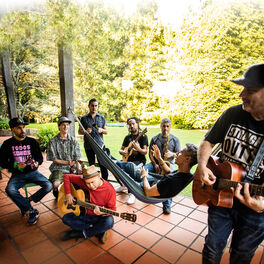 Los Cafres is one of the most respected and emblematic reggae bands in Latin America. Formed in 1987 in Buenos Aires, Argentina, they were pioneers of singing reggae roots in Spanish. During their storied 30 year career, they have launched 14 albums, three of which went Gold / Platinum in their native Argentina. Since their 1987 debut, the band had gone through several changes, finally establishing a permanent structure in 1992. Their first album “Frecuencia Cafre” was released in 1994; this LP set a milestone for reggae music in Argentina, as it was the first one to be entirely recorded in Spanish, it ́s also the first roots reggae album in Spanish in the world. By late 1995 the band launched “Instinto” which was pointed out by Rolling Stone magazine as the “Best Reggae Album in Argentine History“ and a few months later they came out with “Instinto Dub” the first dub album recorded in Argentina. The band ́s discography continued with "Suena la Alarma" (1997), "Espejitos" (2000) and "Vivo a lo Cafre" (2004). Although Los Cafres were already recognized as the most important reggae band in Argentina their popularity exploded with the launch of "¿Quién da más?" (2004), followed by live album "Luna Park" (2006) plus "Barrilete" and "Hombre Simple", simultaneously released in 2007. By late 2009 they came out with "Classic Lover Covers", featuring rock and pop classics played in reggae style. In 2011 they released their double CD “El Paso Gigante“ and in 2013, celebrating their 25h anniversary they launched the luxury CD-DVD “Los Cafres – 25 Años de Música“ winning a Gardel Award (Argentina Music) as Best DVD. In 2016 Los Cafres released their acclaimed “Alas Canciones, which was presented live with an international tour that lasted two years and that led Los Cafres to perform on the most important stages in Latin America, the United States and Spain. 2019 finds Los Cafres immersed in their new musical project, celebrating 3 Decades of career. In this context, the group will develop an important tour with dates already confirmed in the United States, Mexico and Chile between the months of August and November. There will also be a series of record releases that will combine new songs, reversals, b sides and covers. The first official single of this project is entitled "Tu meta" and will be released on August 2.