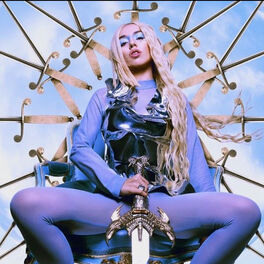 Sweet but Psycho (The Remixes)

Sweet but Psycho (The Remixes)

Freaking Me Out (Curt Reynolds Remix)

Ava Max is an American singer-songwriter of Albanian heritage who was born in Wisconsin but grew up in Virginia where she sang in high-school competitions. She sang on the Le Youth single 'Clap Your Hands' in 2017 and in 2018 featured on Witt Lowry's 'Into Your Arms', David Guetta's 'Let It Be Me' and Vice & Jason Derulo's 'Make Up'.

Her debut solo single 'My Way' came out in 2018 followed by 'Slippin'' featuring Gashi. Her 2018 single 'Sweet But Psycho' topped several charts across Europe including the UK Singles Chart. It also made number one on Billboard's Emerging Artists Chart and reached number two on the Dance Club Songs Chart, number 24 on the Hot Pop Songs Chart and number 36 on the Hot 100. She told Celeb Mix in late 2018 that she planned to start touring.