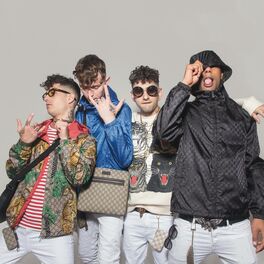 Sex On The Beach

Caraoke - Singing In The Car

The four original members of Dark Polo Gang knew each other as children and initially started rapping for fun until producer Sick Luke persuaded them to release some of their songs. They created their own independent record label Triplosette Entertainment to publish their work, mainly produced by Sick Luke.

In 2015 they released their first mixtape 'Full Metal Dark' and this was followed by 'Crack Musica' in 2016. Their first studio album 'Twins' (2017) included the singles 'Caramelle' featuring Peachwalnut, 'Magazine' and 'Spezzacion'. Their next album 'Sick Side' was released in 2018 and included the single 'Diego Armando Maradona'.

One of the band members, Side, left the group in 2018. In the same year, they became involved in a TV series about their daily lives, which was produced by TIMvision. Dark Polo Gang released two highly popular singles in 2018 - 'British' which has been streamed online over 30 million times and 'Cambiare Adesso' which has reached over 40 million streams. These, along with the single 'Gang S**t' featuring Capo Plaza, were included in the initial release of the album 'Trap Lovers' in 2019. The album was rereleased later in 2019, featuring new single 'Sex On the Beach'.