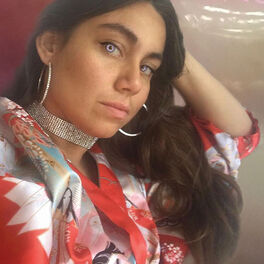 On Repeat by Rod

The 25-year old Copenhagen-based producer and musician Molina creates elastic and articulate art pop music that isn’t afraid to embrace virtues of both experimental as well as pop in her songwriting. Molina aka Rebecca Maria Molina possesses a powerful blend of confidence and sensitiveness, a self-relying and self-made artist that began writing her own music at the early age of 8 inspired by what her mom played for her, including artists like Bjork, Kate Bush and Royksopp: “I remember wanting the Basement Jaxx’ Rooty-album for my birthday at the same age as I was dancing to children’s music.” Molina recalls. Later in her teens Molina got her music education from searching the corners of the internet and following the trail of like minded bands and artists. As a result Rebecca found herself obsessed with both the new wave and punk bands of the 70s and 80s, the shoegaze and dark wave scenes and electronic pioneers like Kraftwerk, Aphex Twin and Boards of Canada. Mixing these influences with an inspiration from japanese music (Miharu Koshi, Mariah) Rebecca had drawn the contours of what would become her solo project Molina.