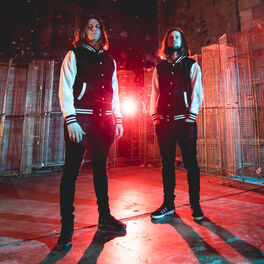 Combining ‘80s melodic rock riffs with shimmering synthwave melodies and a heartfelt vocal delivery, members Michael and Shaun have already established themselves as some of the most uniquely compelling artists within the world of retro music. The results speak for themselves. The retro rockers’ first EP, Action and Romance, is a synth-heavy fan favorite that has earned hundreds of thousands of Spotify streams to date. In addition, the "Call Me" single from the album was featured on NewRetroWave’s popular YouTube channel where it has gained over a quarter of a million views. LeBrock found success once again when they adopted a stronger rock sound with all vocal tracks on 2018’s Real Thing. Packed with fist-pumping retro anthems, the artists’ distinctive and increasingly personal style earned another popular feature on NewRetroWave along with widespread acclaim from fans and critics alike. Now, the members of LeBrock are prepared to step into the next stage of their career, and fans will be more than happy with the results. FiXT Neon has slated a full re-release of the Action and Romance and Real Thing recordings while the duo works on their most ambitious creative efforts to date. You won’t want to miss what’s next for LeBrock.