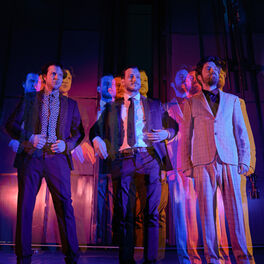 You Make Me Real

Broken Pieces / Skiffle It Up

You Make Me Real

Brandt Brauer Frick is a Berlin-based experimental techno ensemble of three classically-trained musicians, Daniel Brandt, Jan Brauer and Paul Frick. Their debut single was 'Walah' in 2009 followed by the release of their first album 'You Make Me Real' in 2010.

Later albums were 'Mr Machine' (featuring an orchestra) in 2011 and 'Miami' in 2013, featuring guest vocalists such as Gudrun Gut. They released their fourth album 'Joy' in 2016, featuring poet Beaver Sheppard. Their latest single 'Rest' was released in 2019 prior to their fifth album 'Echo'.