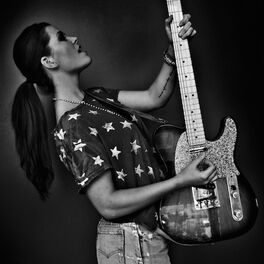 Away in a Manger

Back in the Manor (feat. Hayley)

Santa Bring Peace on Earth and a Couple of Toys

Hayley, the notable “Canadian beauty [who] is positively bursting with talent,” received great acclaim in 2013 as #1 of the Top 10 Guitar Goddesses by Fender, for her “remarkable guitar chops.” The quintessential chick-with-guitar, Hayley throws a striking and dramatic silhouette on stage while cradling her Fender guitar, cross-referencing Bonnie Raitt roots-vibes with Keith Urban virtuosity. Time and time again following each performance filled with her dazzling guitar fingering she leaves awestruck audiences asking one simple question “Where’d she come from?” Hayley recently rocked the stage once again, performing north of the 82nd parallel at the Arctic military station (arguably) the "most northerly concert in the world”, for The Royal Canadian Air Force. Signed to an artist endorsement deal with Fender for an “American Design”, Hayley performed “One Time One Night” at the grand opening celebration of the Fender Visitor Center with renowned Los Lobos and Blues legend Buddy Guy. She is the official face of the brands Visitor Centre and Warehouse in Corona, California. The warehouse allows fans to come by, tour the warehouse and make their own guitar by picking the body, neck strings, and other components. A native of British Columbia, Hayley grew up in a musical, yet somewhat unconventional, household. When she was six years old Hayley’s parents refitted a 45-foot Hawaiian charter sloop and together with her two older sisters, the five took off sailing for two years down the Pacific coast to Mexico. To no surprise, many moons later (in 2005) she became the youngest ‘carded’ (that is, paid by the Canadian Olympic Committee) member of the National Sailing Team, winning gold at the Canada Games among many other prizes and plaudits. “Such a trip will make you or break you as a family”, says Hayley, “and it certainly set the tone for my life. Family is the most important thing for me and we’ve always been really close.” With dad’s old Fender acoustic on board, there was always some form of music being played by this family. The 3 sisters soon figured out harmonies from Beatles tunes to nursery rhymes, and even on their return to Vancouver, summer sailing jaunts always meant music. In marinas around the Pacific Northwest the family trio stood on the bridge of a friend’s big power boat and belted out tunes, backed by dad on rhythm guitar, an uncle on drums and Hayley always lead guitar. The festivities quickly grew to performances for more than 500 family members and friends at a fishing lodge on beautiful Quandra Island; they called it The Hop and even created a winter show at a pub near their Horseshoe Bay home. Hayley’s musical dream was born. In the spring of 2010 a local radio station, Country 107.1 out of Abbotsford, British Columbia was holding a province-wide contest to find the best young talent. Up against more than 100 contestants, following her very first solo performance, she survived round after round until she ultimately won... and what a win it was! The prize package was nothing short of a music career starter kit. Worth $50,000 CND it included studio time, video / photo shoots, a trip to Nashville for a songwriting session, guest appearances at both the Canadian Country Music Awards and the British Columbia Country Music Awards. Soon thereafter Hayley was signed to MDM Recordings Inc., an international country music distributor and record label. A killer guitar slinger, Hayley has been busy ever since, rocking the country music scene, travelling nationwide opening for Chad Brownlee, (also guest-appearing for a one-time performance in Brownlee’s band performing on the national CBC Canadian Country Music Awards [CCMA] televised broadcast) and previously releasing her first 3-song EP “I Am Hayley”. In the Fall of 2011 she performed and competed in the New Artist Showcase at the CCMA’s. She is co-managed by award-winning musician Mitch Merrett (CCMA 2007 Producer of the Year and Juno nominee) and Mike Denney, President of MDM Recordings Inc.