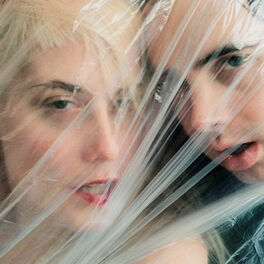 Yr Body Is Nothing

Siouxsie and The Banshees

Dancing in the Dark

Jae Matthews and Augustus Muller produce a dark, danceable form of electropop under the name Boy Harsher. Their songs contain minimal beats and synth textures which frame Matthews' dynamic, sensual vocals and lyrics about desire, fantasy, and loneliness. The duo have been building up a devoted cult following since their 2014 formation, frequently selling out concerts and pressings of their records. Muller and Matthews both come from a background in film. Based in Savannah, Georgia, the two began a project called Teen Dreamz in 2013, which consisted of Matthews reading short stories he had written, while Muller provided a live musical score. Over the course of the year, the music became more danceable, while Matthews' vocals became more dramatic and expressive. They officially changed their name to Boy Harsher in early 2014, and released their home-recorded debut EP, Lesser Man, soon afterwards. After moving to Northampton, Massachusetts, Boy Harsher recorded their full-length debut, Yr Body Is Nothing. The album was issued by DKA Records in 2016, followed by Country Girl EP (on Ascetic House) in 2017. The duo launched their Nude Club imprint in 2018, and reissued their in-demand catalog, additionally releasing Pain II, a single backed with a remix by the Soft Moon. The pair quickly got back into the studio to record their sophomore album, 2019's Careful. Inspired by personal loss and mental illness, the album saw the duo once again referencing synth pop and EBM with their dark electropop.