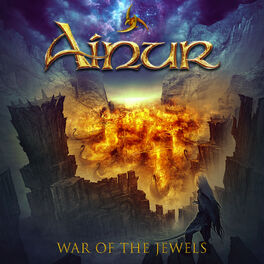 War Of The Jewels

Inspired by Tolkienian mythology, prog-rock orchestra Ainur has been composing J.R.R. Tolkien masterpieces into galloping escapades across the audio landscape for nearly two decades. Their next anticipated record “War of The Jewels” is due out March 19th, 2021 (CD+Digital) (Vinyl - June 12th) via Rockshots Records, which sees the band take an interesting evolution in sound from previous releases. Ainur will completely immerse fans in J.R.R.Tolkien’s war atmospheres. They have imagined every story and every battle and recreate them through unique and deep music. The band comments: "'War of the Jewels' is the eleventh volume of “The History of Middle-Earth”. In Tolkien’s mythology is the tale of the big wars that came out after the creation of the Silmarils by Fëanor. The main theme is the big battles of Beleriand, except for Nirnaeth Arnoediad that will have big space in our next album. The main implied character is Fëanor, the mightiest of the Elves. Musically, it’s a thematic album as all our previous and future ones and you will recognize musical themes that we already used in “From Ancient Times”, “Children of Hùrin” and “Lay of Leithian”; however, the atmospheres are more aggressive and mighty than in the past because the topics we have put in Music this time needed a more powerful musical support." The compositional process of “War of The Jewels” has been very long. It started in 2009 (or maybe before) and it ended more or less last year. Ainur sees it as their “rebirth” album. They have been working hard composing and arranging their music to create the best tribute to Tolkien’s histories that they can.