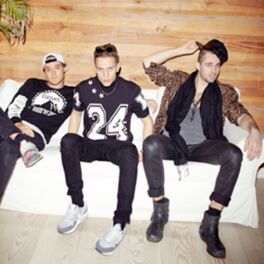 Youth Is Wasted On The Young

What A Life (From the Motion Picture "Another Round")

Lous and The Yakuza

With mega-hits such as "Deja vu" , "Good Together" and "Limbo", the Platinum-selling Copenhagen pop sensation "Scarlet Pleasure" has positioned themselves as the most exciting new band, coming out of Scandinavia. They have received two Danish Music Awards, P3 Gold, an MTV Award and several other testimonials. Recently, they played their second Roskilde Festival headliner show and two international shows at Eurosonic and By:larm after being certified two times Platinum for their EPs "Limbo" and "Lagune". The story of Scarlet Pleasure began when the three members, Emil Goll (vocals), Alexander Malone (bass) and Joachim Dencker (drums), met in the 8th grade and decided to form a band. After years of developing their sound, the debut single "Windy" paved the way for a record deal with Copenhagen Records, massive radio airplay and a huge group of devoted fans. In 2016, Scarlet Pleasure released their Platinum-certified debut album "Youth Is Wasted On The Young", and their recent Platinum-certified EPs "Limbo" and "Lagune" have spawned hit singles such as "Deja vu", "Good Together" and "Limbo". Their most recent single "24/7" was released in April, 2019, and is already gold certified. Scarlet Pleasure’s strong sense of fashion and unique visual profile combined with their ability to constantly invent and predict new tendencies has made them the undisputed trendsetters of the Scandinavian music scene, which in recent years has been one of the most hyped and copied worldwide.