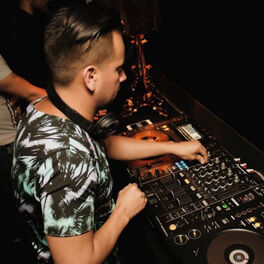 A Blast From The Past

Gianni Filippo Ruocco (A.K.A. Dj Gianni Ruocco) begins his artistic life in 1995 in private parties. In 1998 he plays in houses and garages and get involved with the Tribal genere and with the musical production with his very first track "Tribumba" clasified as tribal house genere line. later, in 2000 starts playing in bogota's Zona Rosa, at Insominia Club wich opens him doors to several clubs like Gotica, Bless and Bar C. As time goes by, he recieved a call to take part in 2002 Bogota's Festival de Verano, with some others Dj's like Dj Plastik and Dj Chiki from Inducana. in 2005 he is playing in cities as Barranquilla, Ibague, Tunja y medellin, with some Tribal, house and Techno sessions and after his succes in this cities, meets the Hardtechno genre and his Dj career turns 180° getting into the underground scene in bogota's downtown, making parties with Dj Chrissdeck and then they founds URANOBEAT Organization. Uranobeat opened the doors to new talents and give them the oportunity to get known. In 2006 take part of Warehouse Organization's parties, keeping in the underground scene in places like the old Siam. In 2007 changes his music genre due to he begins playing at Metropolis Club, at Bogotá north zone, with sounds between electro and house, Dj Gianni Ruocco gets so involved with the Club that he decides to keep on with the electro line and take a place as a resident dj. In 2008 begins his career as employer in the electronic scene by presenting international artists like Ferry Corsten, Mike Harrington, Cristian Varela, Sharam, Rino Cerrone, Christian Smith, The H2O Project, Monika Kruse,Marc Houle. Troy Pierce, Aldo Cadiz, Ivano Bellini, Angel Alanis and others. Obviously keeping his energy in the mix tables by playing in those international events. At the end of 2009 he creates Urbanbeat Fest, a tri-monthly thematic party with 2 ambients and more than 2000 people dancing and partying. In the early 2010 his musical productions gets into the Beatport music portal, and climb to the tops of the many labels wich he is signed in. By the other hand, his label, Uranobeat Records, Footprint Music Records and Neurotical Records gets aproved and grows with international azrtists in order to get worldwide.