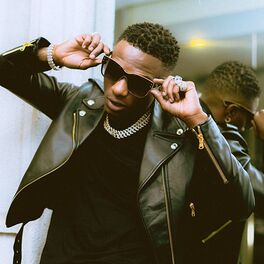 Sounds From The Other Side

by Del B, Flavour, Wizkid

All Eyes On Africa

One of Nigeria's most successful acts of all time, Ayodeji Ibrahim Balogun from Lagos made his first recordings at the age of eleven with the group Glorious Five, which he formed with friends from church in 2009 when he adopted the name Lil Prinz. He gained further fame the following year with the release of the single 'Holla at Your Boy' from his debut album 'Superstar' and dropped out of Lagos State University to concentrate on his music career. Other hits followed, leading up to the release of his second album 'Ayo' in 2014 and he made his international breakthrough in 2016 collaborating with Drake on the major hit 'One Dance', which topped the charts in 15 different countries including the UK, USA and Canada. He has also collaborated with a variety of other artists, including Bracket, Lynxx, Iyanya, R2 Bees, Maleek Berry and Jesse Jagz. In 2013 he set up his own label, Starboy Entertainment, signing artists like L.A.X, R2 Bees and Mr Eazi. Artist biography compiled by BDS/West 10. All rights reserved