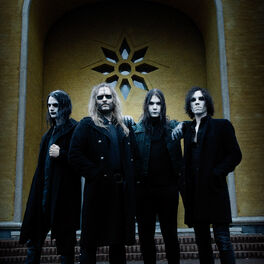 Where the Gloom Becomes Sound

The Children of the Night

Hour of the Wolf

Harakiri for the Sky

Love You to Death

We Are Century Media

Sweden’s kings of gothic, deathly metal have returned with new album, 'Where the Gloom Becomes Sound'. 'Where the Gloom Becomes Sound' is a masterclass in all things tenebrous and creepy. The Swedes have crafted a sonic fingerprint unlike any other by fusing heavy metal, death metal, hard rock, and (Swedish) folk music into what can only be described as the “Tribulation sound.” The immaculate production was helmed by Tribulation, producer Jamie Elton, mixing ace Tom Dalgety (Ghost, Rammstein), and mastering star Magnus Lindberg (Lucifer, Dool). Offer Tribulation: “The music is heavier this time around. But that has to do with the way the songs were written. Sound-wise, it's even more luxurious. It's polished. It's bigger. And it's fatter. There's a big range, I think, to the songs themselves. So, there's also a bit of change in there. I would hope by this point people would be used to change in Tribulation. I will say the horror element is still and always will be present." March with Tribulation as they traverse the fuliginous depths and the gleaming outer heavens on Where the Gloom Becomes Sound.