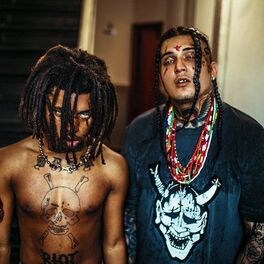 The South Got Something to Say (Deluxe Album)

The South Got Something to Say

The melding of Rock and Rap is a concept that’s existed within the underbelly of music for decades, yet few have done what City Morgue is about to do. When upstarts SosMula and ZillaKami come together, their fusion is seamless—oozing true skill with a reckless lack of fucks left to give. As the supergroup readies their collective debut mixtape City Morgue Vol. 1: Hell or High Water, the dynamic duo delivers a new and exciting vibe for any fan of true music—from hip-hop to metal. It’s City Morgue season. Get ready. Their collective story begins in 2016, though their respective paths in music happened long before that. Growing up in Harlem, SosMula lived at the intersection of hip-hop and ink culture, as his mother owned a tattoo shop that became his second home. Listening to artists like Eminem early on, Sos quickly found his way to music. “I’ve been rapping since I was kid. I never really took it seriously,” the 24-year-old says. “I had the talent, I just didn’t know what to do with it.” Eventually the streets came calling and budding Trap stars like Jeezy would provide the soundtrack to his real life. “The numbers, the details…everything Jeezy was talking about? I was doing that shit,” Sos recalls. “I’m baggin’ up, listening to Jeezy while I’m cookin’ crack.” After a few bids, he landed a 15-month one in 2015 over a house raid, and during that time would correspond daily with Hikari-Ultra co-founder Peter “P” Rogers, who was working at his mother’s shop at the time. When Sos was released, he learned that not only was P building a new movement, but his little brother ZillaKami was now a part of it. Raised in Bay Shore, Long Island, ZillaKami was a product of the flourishing Hardcore movement specific to the region—as clubs like Revolution Bar in Amityville were backbones of that niche culture. “I was in a Punk band called Scud Got Quayle,” Zilla adds, starting with playing bass and moving over to vocals. “I wasn’t into hip-hop too much,” the 19-year-old admits, though once he was put onto the gruff vocals of DMX and the Hardcore-adjacent styles of Onyx and the Beastie Boys, his perspective changed. Selftaught in music theory, Zilla would piece sounds together by the familiar work of his idols like Henry Rollins and his work with Black Flag. Having his own take with a skewed rap spin, the product became not only a successful blend of the two art forms, but so unique that when his older brother P took his label to the next level with business partner Mel Carter, they would make ZillaKami a flagship artist. As soon as SosMula left prison, he hit the ground running as well. “I met Zilla my first day home and we were in the studio every day,” says Sos. Together they became City Morgue, and from the end of 2017, the two erupted Soundcloud with millions of listens. Working with producer THRAXX, the two dropped off “Shinners13,” a menacing cut that’s now clocking in well over three millions streams. Then there was “SK8 HEAD,” which idyllically identifies why this pair works, combining Zilla’s Hardcore upbringing mixed with Sos’s true Trap sensibilities. The visuals are equally intense, as City Morgue is an experience felt with all senses. Countless cuts on Soundcloud, a successful run at SXSW, plus an aesthetic that unifies the early days of Punk with extensive Ink (the two have anecdotes for every tattoo on their bodies), the time is now to bring City Morgue’s first collective project to the streets. City Morgue Vol. 1: Hell or High Water will continue the movement that two have forged, with more tracks that reach a wider audience. “Downer,” is rooted in melody, with an ambiguous title as Zilla is straight edge, while Sos is the exact opposite. “It’s more mellow than the other songs,” Sos says, “Zilla’s even harmonizing.” Things kick up on tracks like “Black Matter,” which is designed for damage. “I walked into the studio and said I’m making a mosh pit song,” Zilla says with a laugh. Songs like “Grave Hop” and “P.T.S.D.” continue along that similar vein, while “Lamborghini Getaway” and “Snow On The Bluff” turn a corner into mainstream. It’s an experience anyone can appreciate and shows what happens when two worlds meet to form an entirely new planet. The Hikari-Ultra/Republic Records signees have already shown a significant track record of hits in a relatively short amount of time, and it won’t stop there. Vol. 1 is the first of many City Morgue collaborations, but both SosMula and ZillaKami will be bringing their solo flavors to the forefront in the very near future. “We’re just here to do something different,” Sos says with confidence as Zilla adds, “We didn’t hear what we wanted to in music, so we decided to make it ourselves.